Now showing category: In The Media

A biosecurity expert has called for a Royal Commission into Queensland’s fire ant program after hundreds of nests were found on the doorstep of the eradication program’s headquarters south of Brisbane.

Judith Kerr
@judithkerr1
June 16, 2021 – 6:00AM
Quest Newspapers
Hundreds of fire ant nests are thriving on a busy southside road right under the noses of authorities trying to eradicate the deadly pest. Fire ant expert and whistleblower Dr Pam Swepson has called for a Royal Commission in to the millions of dollars being spent on the eradication program.

Dr Swepson said Berrinba had been in the fire ant program’s operational area since 2001 but was still heavily infested and called for a Royal Commission into funding the program.

The National Red Imported Fire Ant Eradication program treated the nests as a matter of priority after they were deemed to be in a high-risk location for people being stung.

Since the end of March, the program has had eight complaints about nests in the Berrinba area, including along Wembley Rd, and all were treated as a priority.

The latest nest sightings, less than 2km from Logan City Council chambers, followed an extermination plan to rollout from Ipswich in the west to Logan in the east.

Dr Swepson called for a review of that plan last year after reports of the pest infesting Logan parks and more than 300 nests were found at the newly-built Yarrabilba Secondary College. Yarrabilba Secondary College which prides itself on outdoor learning, had more than 300 nests.

A spokesman for the National Red Imported Fire Ant Eradication program said fire ant nests had been regularly detected throughout Logan “for many years”.

“Under our 10-Year Eradication Plan we are concentrating our efforts on ridding fire ants from the western boundary of the known infested area,” a spokesman for the program said. “If they wish, residents can purchase fire ant bait for suppression treatment from retailers or hire a pest manager to treat on their behalf.

“These products are not harmful to humans and are widely used in mosquito control programs and pet flea collars.”

The spokesman said since 2018, significant progress had been made with about 30 per cent of the total infested area in southeast Queensland treated and now undergoing clearance surveillance. 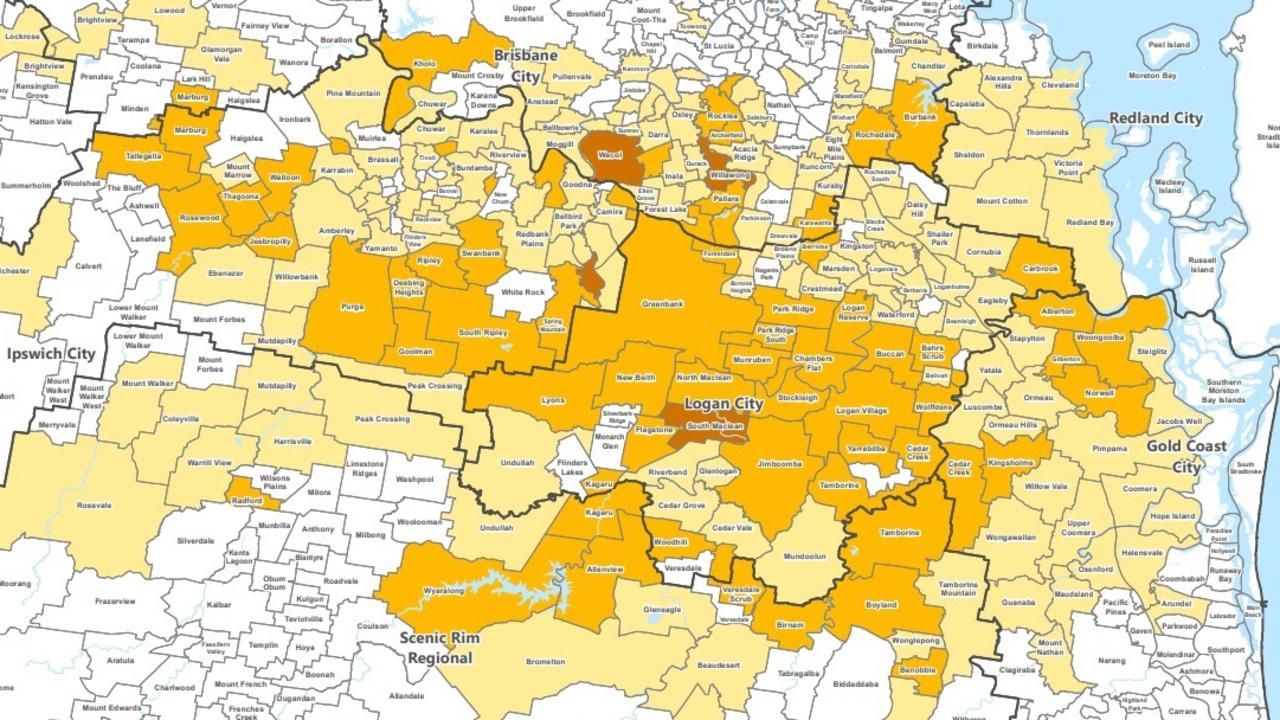 A map showing the extent of the fire ant spread.

Dr Swepson, who worked on the National Red Imported Fire Ant Eradication Program from its inception in 2002 for three years, said fire ants were out of control in southeast Queensland and Logan and Biosecurity Queensland was taking $411 million but dodging its duty.

“Biosecurity Queensland is walking away from a well-entrenched and out-of-control fire ant infestation and dumping the costs of controlling the pest on to the public,” she said.

“Businesses who want to evacuate soil from an area are being told to engage a licensed pest manager to inspect and treat the area before it is evacuated and there is no mention of Biosecurity Queensland treating anything. Fire ant bites can be fatal.

“The state is walking away from a $600 million disaster it has created and dumping the costs and risks of living with the pest on to the public. Time for a Royal Commission.”

Dr Swepson said the products businesses and residents have been told to use were expensive and not available to unlicensed residents, even though they were approved by the Australian Pesticides and Veterinary Medicines Authority.

Under the Act, residents are only permitted to use spray packs of pesticides available in supermarkets or grocery stores.

100s of fire ant nests under the nose of Fire Ant Program Head Office in Logan City. Have they given up treating them? Now dumping the costs and risks onto the public. Time for a Royal Commission.